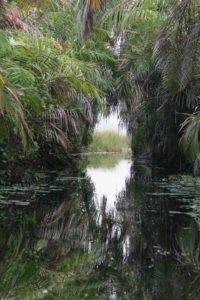 The Amansuri wetland is a community protected area that was created through a collaborative partnership between the Ghana Wildlife Society and the chiefs and people of the Western Nzema Traditional Area. The wetland is on the western coastline of Ghana, in the Western Region of Ghana. The area is about 360km west of the capital, Accra, with the closest large urban center being Half-Assini, 35km to the west. The former name of the area in the colonial era was Apolonia, and there are still vestiges of the past, notably the Apolonia fort in Beyin village. The Amansuri catchment area lies within the Wet Evergreen forest zone of Ghana, a forest type restricted to the highest rainfall zones. The Amansuri wetland, which has an area of more than 100 km², is a relatively pristine complex consisting of a freshwater lagoon, forests, grasslands and rivers, and it has the most extensive remaining stand of intact swamp forest in Ghana. It is the only known peat swamp forest in Ghana and nationally, the best example of freshwater swamp forest characterized by black humic waters. More than 70% of the site is covered by swamp forest, which makes accessibility in many parts very difficult, a factor which has resulted in significant remnants of unspoilt areas. Faunistic inventories have identified 27 species of mammals, including black-and-white colobus, mona and spot-nosed monkeys, forest squirrel and red riverhog, 26 species of reptiles and amphibians, including the slender-snouted crocodile Crocodylus cataphractus and the dwarf crocodile Osteolamus tetraspis, green mamba and black forest cobra, and 26 species of fish. 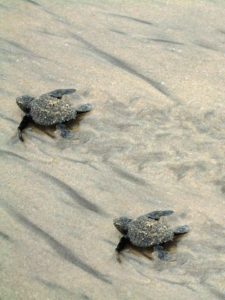 Furthermore, the area has a relatively rich indigenous avifauna and also hosts various migrant species; according to the intentories, a total of 105 bird species have been recorded, 65 of which are of global and national conservation interest. Due to its ornithological importance, the area hasbeen classified as an Important Bird Area , and it also meets the criteria of the Ramsar Convention as Wetland of International Importance. However, its official designation as Ramsar site is still pending. Another characteristic of the site which further enhances its importance in terms of biodiversity is that the coastal areas constitute nesting sites for various marine turtle species, such as the rare leatherback turtle Dermochelys coriacea, Green turtle Chelonia mydas, and Olive ridley turtle Lepidochelys olivacea. In terms of flora, 33% of the 237 plant species identified are endemic to the wetland. 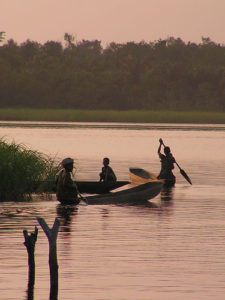 The key threats to the conservation of biodiversity in the area are the breaking down of traditional approaches to resource management (such as the local taboos) and the spread of the giant aquatic grass Vossia cuspidata resulting from eutrophication of the waters, which affects fish productivity. On the coast, consumption of sea turtle eggs by local inhabitants is a key threat. Other activities that are theoretically controlled by the existing by-laws but do occasionally occur are slash and burn agriculture, grassland burning for pasture, logging for fuel wood, and hunting. The Ghana Wildlife Society (GWS) in partnership with the Western Nzema Traditional Council (WNTC) has been implementing since 2000 the Amansuri Conservation and Integrated Development (ACID) Project. The aim of the project is a conserved wetland system where ecological functions and scenic beauty are maintained, while low impact resource uses by local people are practiced. This concept advocated is in line with Ghana’s forest and wildlife policy that seeks to involve local people in the conservation and management of wildlife resources.The main focus of the ACID project has been the development of ecotourism. Indeed, the Amansuri wetland showcases nowdays an exemplary ecotourims programme, whereby local communities are directly involved and are the main beneficiaries of the revenues derived from the programme. During the first years of ACID, the ecotourism programme evolved around visits to the Nzulezo stilt village (the only of its kind in Ghana); nowadays however, there are ongoing efforts to diversify the ecotourism products offered to visitors. An extensive public awareness campaign has been ongoing, in order to increase people’s awareness on the importance of the site. A third component of ACID has been the Small Enterprise Development and Support Fund, which has provided microcredit to a total of 115 beneficiaries in 6 communities. Microsfere will enhance this last component of the ACID project, in collaboration with GWS.

The key economic activities in the Amansuri area are fishing, both in the wetland and at sea, local gin production (apeteshie), coconut processing, small-scale farming of crops such as coconut, oil palm, cassava, maize, cocoa and plantain, fish smoking, and small-scale trade. The freshwater fishery is particularly productive due to habitat heterogeneity. In addition, local cultural taboos that limit the time of fishing, the gear used as well as fishing areas have significantly contributed to the control of overexploitation of the fish resources in the wetland. Given that the wetland is a community protected area, the aforementioned activities are allowed within the protected area, though under limitations as imposed by the agreed by-laws.

Bibliographical note: parts of the aforementioned information have been derived from the Amansuri Wetland Ecosystem Management Plan, GWS, 2003.