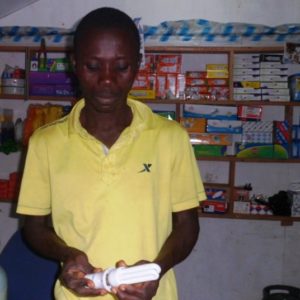 Joseph, is a 32-year old father of children, all of which, except the smallest one, are going to primary school. His wife is a seamstress. Joseph has three activities: he is a carpenter, owns a store selling electrical parts and is also a pig rearer.

Joseph joined the Microsfere project as a pig rearer, since there is normally high demand for pork in the city of Takoradi but also in the village where he lives (Kengen, Amanzuri). However, he recently had to stop this activity since the government issued a ban on the selling and even rearing of pigs due to an outbreak of pig disease. The ban is now over, and he plans to start again this business. In the meatime, he continues with his trading business.

He participated in a business training that was provided by Microsfere, and he claims that the most important element he retained was the importance of savings. Thanks to his participation in the Microsfere microfinance project, he has managed to makes significant savings, that assist him in caring for his family.