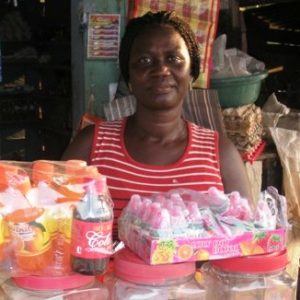 Mercy, 45 years old, moved to the village of Kenkuase in the northern part of Kakum National Park 15 years ago, once she got married. She owns a small provisions store and sells household items such as soap, sugar, toothbrushes, etc.

She did not participate in the 1st loan cycle of the Microsfere project, because she claims that at the time her business was not stable, and she was not sure about her repayment capacities. However, her situation had stabilised when Microsfere started the 2nd loan cycle, and she thus joined a newly formed group.

Her group consists of 14 women, aged between 29 and 47, all of which are engaged in small-scale trade of food stuffs and household items (cooked dishes, fish, palm oil, vegetables, textiles, etc.). Each group member received 150 GHC (about 75 euro), as they were newcomers to the project. Mercy, who became treasurer of the group, decided to join the Microsfere project in order to be able to increase the stock of her shop and thus her profits.

Mercy attended the business training provided by Microsfere at the end of 2010. One of the most important things she learned, according to her, is the fact that she must always make sure to have abundant stock in her shop, and that she should keep detailed inventory of the goods purchased and sold, as well as clear inventory of the purchase and sale prices. She also learned how to sell products at the right time and season. She admits though that product inventorying is a very tedious process that she does not like very much.