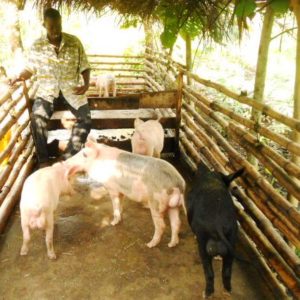 Peter was born and raised in the village of Kengen in the Amanzuri wetland. Contrary to some of his fellow villagers, he never had the desire to leave the village and go to the big cities to work.

Both he and his wife are working, he as a carpenter and pig farmer and his wife as seller of plastic goods. Three of their four children go to school while the fourth one is still too young.

He registered in the Microsfere project for his pig farming activity, as he wanted to increase his stock. He takes care of the pigs early in the morning and at the end of the day, and in between he does his carpentry work. Though both activities are profitable, Peter says that pig rearing is more lucrative.

He uses the Microsfere microcredit to buy piglets and animal feed. A piglet will cost about 40 euro and after breeding it he manages to sell it for about 230 euro. Ideally, he prefers to take the animals for sale in the city of Takoradi, but occasionally he will also sell it to local food caterers.

Thanks to his participation in the Microsfere project he has managed to increase his permanent pig stock from 2 to 8 animals, has made savings and manages to pay for his children’s school fees. His future plans include adding a poultry rearing unit.